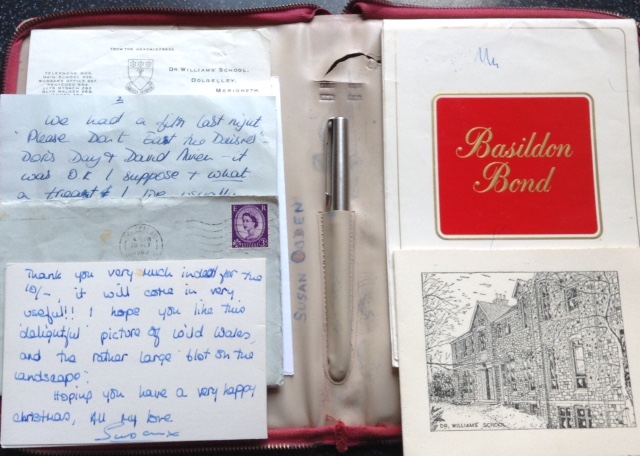 We had to bring to school each term a writing case supplied with a Basildon Bond notepad and envelopes and a store of stamps for the term ahead. A period every week was set aside for writing letters home. This was supervised in the classroom usually by a prefect and was held in silence. These weekly epistles often consisted of requests for money, tuck or stamps, news about events such as walks or the occasional film (see letter in pic - 'Please don't eat the Daisies' with Doris Day & David Niven, celebrities in the 1950s & 60s)

Another vital piece of information for parents was the list of school test results (see related item at the side).

We were warned against writing anything about being unhappy or homesick and to prevent anyone breaking this rule, all letters had to be deposited in a box near the headmistress’s study unopened. If anyone had dared to admit to being unhappy they were summoned to the Head’s study and given a good talking to.

Parents received all letters from school with the addition of " ………… is well and happy”, handwritten by the Head, even if that was far from the case.